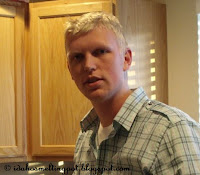 Name: Michiel Juch
Born in: Groningen, The Netherlands
In Idaho since: August, 2008

"Actually, that was not the first time that I came to Idaho. I'd been here before as an international exchange student in 2006, when I attended a high school in Jerome. I returned to the Netherlands after ten months when my program was done. When I finished high school and decided to continue my education, I chose to return to Idaho and enroll at BSU" says Michael. He's peeling the potatoes to prepare a dish called Boerenkool met Worst, kale with kielbasa.

"Boerenkool is traditional Dutch food and a typical winter dish. It's mashed potatoes mixed with strips of kale and topped with juicy slices of smoked kielbasa. It's not so much a family dish but it is definitely a very traditional one. It makes me think of wintery evenings in Holland, when it's cold outside but warm and cozy inside and the whole family is gathered around the dinner table, eating and spending time together." 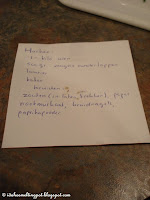 When I ask if that would happen a lot, gathering the whole family around the dinner table, Michiel says: "Yes, every so often we'd gather at my grandpa's for dinner. He's a great cook. But my dad is also a wonderful cook. My friends thought for the longest time that he was a chef because of how good his food tasted. I don't cook a lot at home nowadays: I'm busy with school and work and often will be content with a sandwich or a cup of soup, but when I feel like cooking I always ask my dad for help. He's spoilt me with his good cooking because to this day, I will not eat anything out of a can if I can avoid it!".

"But if I want to make hachee, a Dutch beef dish, I call my grandpa. He makes the best hachee in the world, and just the other day he finally shared the recipe with me. He also makes the best meatballs. They are just amazing, but so far he has kept that recipe a secret. Well, he said he once shared it with my dad and my dad prepared the meat according to the instructions, but they tasted awful! So I guess it's fair to say he's not willing to part with that secret just yet", Michiel laughs out loud. 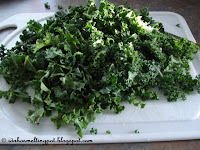 Wash the kale well as sand and mud tends to get trapped in the curly leaves. Shake off the water and rip the leaves off the stems. Roll and cut the leaves into narrow strips. Dispose of the stems. Volume-wise, you'll need 2/3s of kale versus 1/3rd of potatoes as the kale loses most of its volume after it's boiled. Peel the potatoes, quarter them and place them in a Dutch oven. Add water to barely cover the potatoes, then put the kale on top. Cover the pot with a lid and bring to a boil. Boil on a low flame for about 20 minutes or until the potatoes are done. 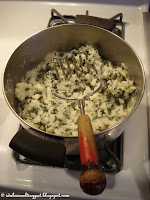 To heat the kielbasa, you can do two things: either take it out of the wrapper and place it on top of the kale when you boil the potatoes, or place the entire package in a saucepan with warm water and slowly bring to a simmer.

With the lid on the pan of potatoes and kale, pour off the remaining liquid . Add the butter to the potatoes and mash. If you don't have a traditional Dutch "stamper", you can mash the potatoes with a masher or a whisk. Add in the milk, continue to mash until the biggest lumps are gone and the boerenkool has reached the consistency of mashed potatoes. Taste and adjust with salt and pepper.

Take the kielbasa, cut it in large slices and place on top. Serve and get that cozy wintery Dutch feeling!

As usually happens with a fairly straightforward dish such as boerenkool, almost every Dutch family has its own favorite variant. Michiel's family likes to mix in sautéed pieces of salted pork or bacon and pouring some of the fat into one of the crevices on top of the mashed potatoes, others stir in small dice of aged cheese right before serving. But boerenkool will traditionally always be paired with smoked kielbasa. Any other choice of meat would most likely not uphold the character of this sturdy, cold weather dish.
Posted by Nicole Holten at 8:56 PM